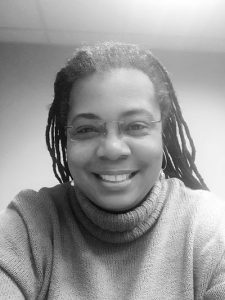 If anyone can effectively articulate the work of a webmaster to a nontechnical layperson, it’s Erica Gage.

“I like to compare it to the medical field. A family doctor runs tests for you, tells you how to stay healthy, and if there’s something serious, they can refer you to a specialist,” she explains. “Web Specialists are basically the same thing: We’re checking to make sure your site is up and running, performing basic maintenance and updates. And if you want to refresh, change or redesign your site, we can do that also. We are general practitioners for all things web.”

The Jefferson City, Mo.-based wife and mother (to a daughter who recently graduated from college) has been exposed to tech since her formative years. Her own mother also worked in the IT field, perhaps setting the stage for Erica’s professional ventures.

“My mother was a developer, so I grew up learning some of the different languages and programming,” she says.

But Erica’s career path hasn’t been entirely linear. After completing her degree in psychology at UCLA, she pondered exactly what to do next.

“I was most interested in environmental psychology, which was an emerging field at the time,” Erica says. “It focused on environmental aspects such as lighting and temperature in influencing people’s behaviors and moods. I found it incredibly interesting, but I wasn’t sure how to approach it at that point.”

Erica joined a security company as an office manager, where she helped to manage and execute the organization’s IT needs. After leaving Los Angeles, Erica moved to Missouri to be closer to family and worked for the Department of Social Services and, later, the Secretary of State as a webmaster and developer.

Erica’s professional pathway came to an unexpected crossroads when her position was eliminated at her last employer, a private company in the construction and housing sector.

“I found myself looking for a job, and I came across BELAY,” she says. “I found the concept interesting; I had all of the tools [necessary to work from home], and it sounded like a good idea.”

Plus, with BELAY’s remote work options, the opportunity aligned with Erica’s current wants and needs. She adds: “I’m not quite ready to move to a larger city where there are more technical opportunities.”

Erica came on board with BELAY as a contract webmaster in May 2017. She was assigned her first client in July. And today, she works with 14 clients across various disciplines and lines of business that are just as dynamic as one might expect, given the number – from churches and a for-profit software company to authors, professors and others – even a dog training consultant.

“What they have in common is that they all have a footprint on the web, and need to maintain it or expand it.”

Those who are still uninformed about virtual work may view it from a limited lens, perhaps seeing such roles only as part-time, ad hoc or supplemental. Some work-from-home contractors with BELAY are lured by the ability to keep their professional feet wet, while still earning a competitive rate and enjoying flexibility.

But others have a full desire to maintain a steady flow of full-time work.

Between the more than a dozen clients that Erica serves, “I work pretty much a full-time job. They have different needs, so I have to adjust accordingly. I have broken down my schedule on certain days to accommodate those who are in different time zones.”

This isn’t Erica’s first rodeo with working from home. However, the culture and sentiment around it with BELAY is a total departure from former experiences.

“In my prior positions I had the option to work from home if I needed to, but it was kind of frowned upon to actually do so,” she says. “BELAY is my first totally remote position; I don’t actually work in my pajamas as much as people may think. I still have to be prepared – for instance, you have to be presentable when you’re doing video calls with a client.”

Now, as Erica is spared a grueling commute and many of the time zappers and stressors associated with conventional, office-based jobs, she literally takes a breath of fresh air.

“I enjoy the natural light, go outside, take a look at my surroundings, and get on with my day. It’s wonderful.”

Recruiting for webmasters can be challenging, but BELAY is here to help. Meet Zhanna - she's an example of who you'll have on your team.

Leverage the Expertise of Others for the Stability of Your Website

Keeping your website dynamic, secure, and stable is a demanding job. Don’t leave it in the hands of amateurs. Instead, leverage the expertise of...