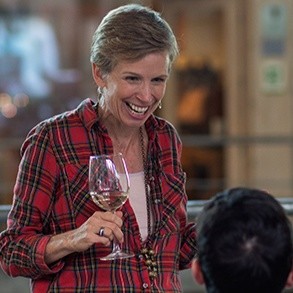 As Founder and CEO of Kingston Family Vineyards, Courtney Kingston manages the importing, sales, and marketing for her family’s wine business. She graduated from Princeton University and wrote the business plan to plant pinot noir in the hills of Casablanca Valley, Chile, while in graduate school at Stanford.

Kingston Family Vineyards blends the best of the Old and New World winemaking as they handcraft small-production lots of Pinot Noir, Chardonnay, Syrah and Sauvignon Blanc from their cool climate, hillside vineyards in Casablanca Valley.

They’re one of only a handful of Chilean vineyards leveraging Californian viticulture and winemaking expertise to uncover the potential of their Chilean terroir.

With a 100-year-old farm and the pressure to “… pass [the family business] on to the next generation a little better than you found it,” Courtney knows all too well the importance – and scarcity – of time.

But when she found herself pulled in too many – and some arguably less important – directions that infringed on that precious time, Courtney received some feedback she wasn’t quite ready to accept.

And it started with her well-intentioned brother.

“My brother would comment, ‘You can’t be a CEO and not read all your emails,’” Courtney recalled. “[But] my husband’s also an entrepreneur – and his job is even more consuming than mine. Meanwhile, we have three daughters that are now 15, 13 and 11. So our plate is pretty darn full.”

Bringing this feedback to her female entrepreneur group, they echoed his sentiment.

“I’m in a group of female leaders at Stanford, which is close to where I live in California when I’m here,” Courtney shares. “These are women leaders I’ve shared with for eight years – a fantastic group who inspire me – [and to whom] we bring our professional and personal challenges to share with each other. They said, ‘You need help.’

“[But] I couldn’t keep my head above water. I just had way too much going on but thought I should be able to. Other entrepreneurs don’t have assistance. We can’t afford that. We are still bootstrapping where our business is to this day.

“We’re still not profitable because once the vineyard business is profitable, we build a winery. And once the winery business was profitable, we would build a tasting room. And then we do a private event center. We’re always looking decades – generations – ahead. So the idea of spending on me didn’t feel quite right.”

Still, her group insisted that she consider getting help.

“One of the best things about these groups is that they hold you accountable. So I thought I’ll try it. I’ll bring the goalposts in pretty close [for] six months. I was also dropping a lot of mom balls.

“I was missing pediatrician appointments. I was kicking the can on things that mattered.”

“And that’s how I found out about BELAY.”

Courtney was paired with BELAY Virtual Assistant Erica for 45 hours a month and was able to slowly move her goalposts apart.

“I’m a Type-2 Enneagram, so I’m very focused on relationships and connection and I tend to be pretty transparent,” Courtney shares. “So when we first started working together, I felt a connection very early with Erica. She had also worked for a family business prior and could speak Spanish. She also has kids my age. We had similar personalities.

“And she very quickly put me at ease and helped me feel supported. I’m the person who goes to the therapist and sits down on the sofa and asks them how they’re doing. So Erica has really made me feel very comfortable.”

Initially, Courtney had Erica managing her email, albeit somewhat reluctantly as she had hesitations about having someone speak for her. But in time, Erica earned Courtney’s confidence.

“When I learned Courtney’s voice, it became even easier,” Erica says. “I knew [when to use] my voice and [when to use] her voice.”

“That was the beginning – just email,” Courtney adds. “And then it grew to my calendar and now, and it’s grown to all sorts of things. ‘How is she doing this in 12 hours a week?’

“She always goes above and beyond, which is incredible,” Courtney adds. “Now, my calendar is so much more manageable. And the reason is that Erica listens when I tell her, ‘You know, I need some space between meetings. I need to be able to go check on my kids who are being raised by wolves over there.’ Or I need to get some fresh air.”

And Courtney was able to lean into Erica with the advice she received as she onboarded with BELAY.

“I remember the number-one piece of advice was [about] the importance of trust. If I don’t fully trust, then Erica can’t do all the things I really need her to do.”

And one of those things was making time to care for herself and her family.

“I was not taking care of myself as well as I should, as well as my kids,” she admits. “And so I just needed to completely say, ‘Here are my logins. Take over finances, calendar, you know – everything.’ So the trust really mattered.”

“I kind of hid her,” Courtney laughs. “People didn’t know about her. [But] they noticed a change. I started to get feedback essentially saying, ‘Whoa. Courtney’s shown up to meetings on time and she seems a little more relaxed.’”

And it’s all because Erica knew how to support her.

“My job is to meet the client where they are,” Erica adds. “What Courtney and I have in common is that we have the three kiddos and we all have a flurry of activities and things going on. So I think I’m able to really understand where she’s coming from.”

If you ask her, Courtney might swear Erica can read her mind, even recognizing when a weekend email may need more time to marinate before hitting ‘send.’

“I don’t know how Erica does it because she’s just always there for me,” Courtney says. “[Erica said], ‘I wanted to give you a moment to process because it’s a weekend and you’re busy.’

“That stopped me in my tracks. Erica not only knew my strengths, but she could even anticipate my blind spots!”

“It goes back to that communication,” Erica adds. ”[It’s] studying who your client is, and really getting to know them – it’s gold. I can see [when] she needs some breathing room. I haven’t seen her workout. I haven’t seen her [take a] walk. So I just go ahead and put it in those spaces to allow her to use that time for whatever she may need to do for herself. She now has the space to breathe.”

“It’s just trusting in each other,” Courtney concludes. “It’s as simple as that."